Glaucoma is a progressive optic neuropathy (damage of the optic nerve) usually associated with raised eye pressure (intra ocular pressure/IOP).  It is generally considered a disease of adults, occurring most frequently over the age of 40 but it may be present from birth or develop in childhood as well.

How does a child with glaucoma present?

Childhood glaucoma present differently depending on the age at which it is manifest. In cases of congenital glaucoma, babies are born with large sized hazy corneas, may have excessive watering from the eyes and do not tolerate light. This appearance of the eye is called buphthalmos. In older children, glaucoma may manifest as a rapidly increasing myopia while in adolescents, it is often asymptomatic. These forms of glaucoma are called congenital, developmental glaucoma and juvenile glaucoma respectively. 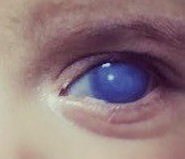 No glaucoma is not always inherited. In fact in majority of cases, glaucoma develops in children whose parents do not have glaucoma. Unknown factors affect the eye during its development in the uterus which cause glaucoma. Apart from this, glaucoma may also develop in children after an eye injury or eye surgery. Primary  congenital  glaucoma  (PCG) occurs  in  1:10000  births  and  is more  common  in  boys.  Three fourths of the  cases  affect both eyes.

Why does eye pressure increase in glaucoma?

To understand the reason for high eye pressure in a simple manner, the eye can be thought of as a balloon filled with a liquid (called aqueous humor). This liquid is constantly being formed by a special apparatus and is constantly exiting the eye through a special area called the trabecular meshwork. Glaucoma  develops  due  to  the  anomalous  development  of  the  anterior  chamber  angle. If the inflow and outflow is equal, the eye pressure is in a normal range. If the outflow decreases or faces more resistance, then the eye pressure starts to increase. In congenital glaucomas, this exit channel is malformed from birth and hampers the outflow of aqueous humor. This causes the eye pressure to rise. Since the eyeball is still in a developing state, the high pressure causes the cornea size to increase and the eyeball to elongate. The appearance of the eye eventually becomes like that of a bull called buphthalmos. The optic nerve which exits at the back of the eye is also damaged by the increased pressure in the eye and this causes irreversible vision loss.

How is glaucoma diagnosed?

The diagnosis of pediatric glaucoma is clinical; taking into account the eyeball size, cornea size and appearance, eye pressure and optic nerve changes. In older children and adolescents, visual field testing may be possible to evaluate the extent of optic nerve damage.

What is the treatment of glaucoma in children?

Treatment is surgical in all cases of congenital glaucoma and most cases of juvenile glaucoma.  Medications may also be  used  concomitant  with  the  surgery or as a stop-gap measure till surgery is done. The initial and subsequent follow up evaluations often need to be performed under general anesthesia. The surgical procedure for childhood glaucoma is trabeculectomy with trabeculotomy which entails creating a hole in the white portion of the eye to allow excessive aqueous humor to drain out. Despite a successful glaucoma surgery, a lifelong follow up and resurgery nay be needed.

What is the chance of vision in a child’s eye with glaucoma?

The overall prognosis for vision depends upon how early the glaucoma was treated and extent of damage to cornea and optic nerve. In many cases, vision is subnormal even after glaucoma surgery. However in cases of timely surgery, good functional vision can be achieved.