I was referred a patient by a senior from New Delhi and when I examined the lady, I understood that this was no straight forward situation. It was a young woman in her early 20’s who had just delivered a healthy baby girl. Unfortunately for her, during the delivery she had a bleed in the brain and that left her with a left eye abducens nerve paralysis (Lateral rectus muscle paralysis) and a left gaze palsy. Her eyes would not move to the left side at all and the left eye was deviated inwards (convergent squint).  There was a squint and she was having a double vision. She came to me after about 6 months after the brain haemorrhage and had shown little recovery during this period. I evaluated her and found that there was need to do surgery to correct her squint and help her get rid of the double vision because she was extremely distressed by it.

Now after 2 years of her surgery, she does not suffer from double vision and the squint is completely corrected. She tells me that she really enjoys playing with her 2.5 year old daughter and is happy her eye problem is over. 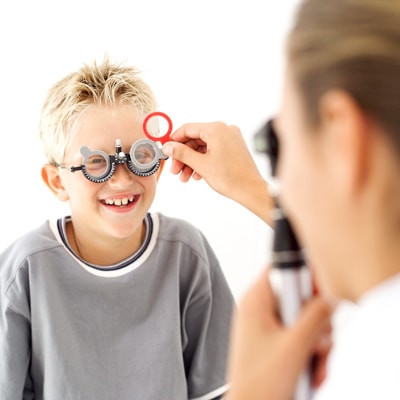 I am often asked by parents about why more and more children are needing glasses? Is there something they can do to prevent this? In this blog, I will address some of these concerns and will shed light on the growing burden of refractive errors.

Refractive error refers to weak eyes which need optical correction in the form of spectacles for achieving clear vision. Refractive error can be of many forms, namely hypermetropia (farsightedness) where the eye is smaller and less powerful than normal and requires plus powered glasses, myopia (shortsightedness) which occurs in those eyes which are a little longer than normal and more powerful requiring minus powered glasses and astigmatism where the shape of the cornea or lens is not spherical/round and a cylindrical lens is required for a clear vision. The commonest form among these is myopia and it is on the rise.

Myopia is a very common cause of visual disability throughout the world. It is usually diagnosed in early school years when children face difficulty in reading from the blackboard. Since near vision is normal in myopia, and prior to schooling most work done by the child involves large objects at a close distance, mild to moderate myopia goes undiagnosed till about 5-6 years of age. School myopia commences around 5-15 years of age and tends to stabilize in the late teens. Of late, there have been reports of more and more number of children requiring glasses and this has led to speculation that myopia is on the rise. In fact parents and teachers of most schools the national capital region and around India have spotted a higher number of children sporting glasses

So, what is causing this increase in myopia? The risk of developing myopia is influenced by genetic predisposition along with environmental factors. Traditionally, it is well known that children of parents wearing glasses are more likely to wear glasses than those whose parents don’t have a refractive error. While this is true to an extent, it is not the only aspect and more often than not children with no family history of refractive errors are having to use glasses. An interesting concept in genetics is the phenomenon of anticipation whereby what happens in one generation at a certain age happens earlier in the next generation and even earlier in the next. This may hold true for myopia as well since children of myopic parents seem to get glasses at an earlierage as compared to the parents.   Certain known risk factors include premature and low birth-weight, poor nutrition, tall height and oriental origin (Hong Kong, Taiwan, Japan, and Singapore). Interestingly myopia is more often among persons who are more educated, have a higher educational level of the parents, higher intelligence and better socio-economic status. Numerous theories have attributed near work to increase in size(length) of the eye causing myopia. These find proof in the fact that certain occupations, such as sewing, and carpet weaving that require a large amount of time spent in close-up work have workers with higher prevalence of myopia. In fact, the increase in number of myopic persons in progressive generations has been attributed to increasing near tasks such as working on computer, video games, and television watching. Probably this may be the reason why myopia is less prevalent in the rural areas as compared to the urban areas. Though, there are no studies from India, based on the data from other Asian countries, overemphasis on academic performance and paucity of structured outdoor activity in the schools may be a factor contributing to the high myopia incidence rates in the very young.

Is there anything you can do as parents to prevent myopia or reduce its progression? Yes and no. If the cause for myopia is a genetic one then not much can be done to prevent its occurrence. A good diet and increased outdoor far-distance activities may mitigate the disease but definitive evidence for this is lacking. Ophthalmologists and parents have tried using certain eye drops (diluted atropine) to reduce the progression of myopia and limited success has been achieved in some studies. However with respect to Indian eyes, no such evidence exists and it has been noted that discontinuation of this treatment has resulted in the same amount of myopia as would have occurred if these drops were not being used. As of now this is an experimental treatment. The one thing you can do as parents is to bring your child for an eye checkup prior to them joining school and annually after that in order catch myopia early and enable appropriate use of glasses.